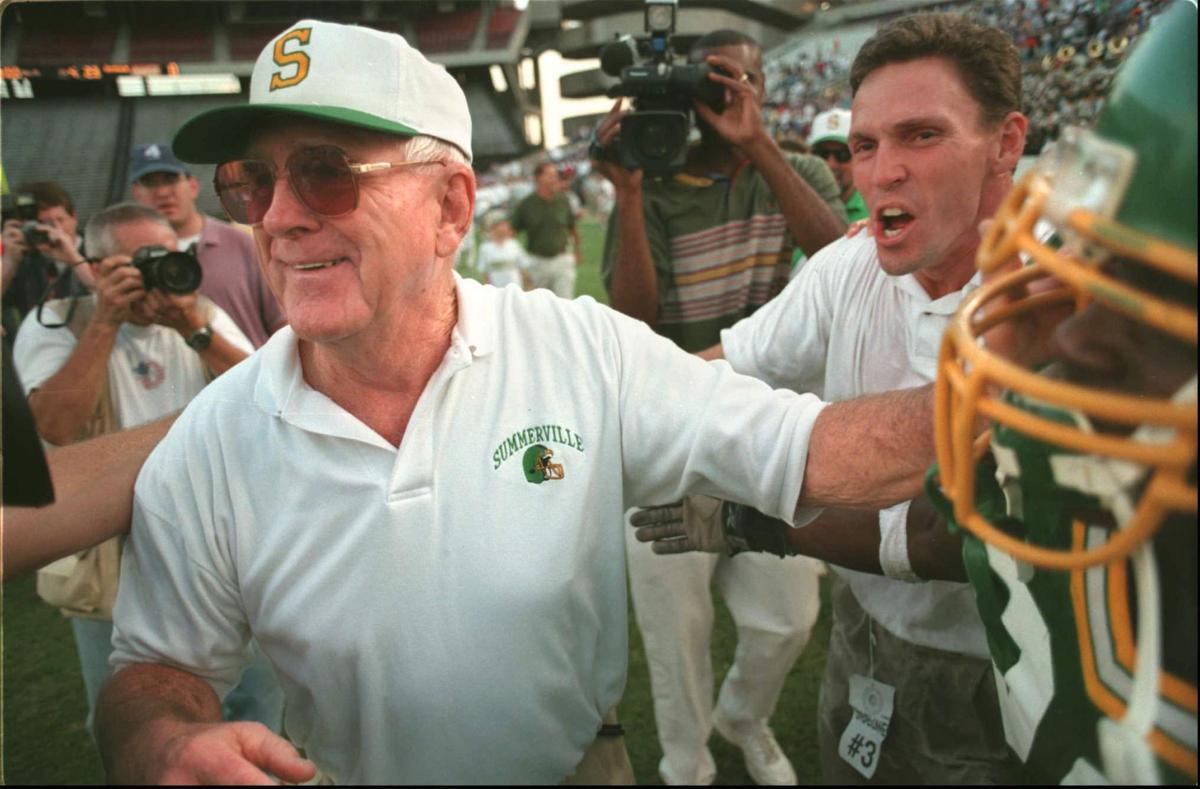 SUMMERVILLE — For more than 60 years, people cheered coach John McKissick as he led the Summerville Green Wave to victory under Friday night lights.

Now, the local legend’s legacy is being cemented with the creation of the McKissick Museum.

McKissick was known as the winningest football coach in history. He coached at Summerville High School for 63 seasons, starting in 1952 and retiring in 2015.

Along the way, he coached three generations of players with several playing in the NFL, such as star wide receiver AJ Green, now of the Arizona Cardinals. McKissick was elected to the National High School Hall of Fame in 1990.

The museum, which recently got a boost of state aid, started out as a community effort.

Jimmy Tupper, vice president of the nonprofit South Magnolia Event Group, first got the idea 2½ years ago when the group was raising money to renovate the Summerville High stadium and to also build a statue of McKissick and his wife.

They had raised over $2 million — more than enough to cover the stadium and statue.

“There was so much drive to keep the green and gold alive,” Tupper said.

With roughly $400,000 left over after the stadium and statue, Tupper decided a McKissick museum would be “the final cap to the project.”

He noticed the high school had a small building, formerly the original Dorchester School District Two office according to Tupper, across from Memorial Stadium. It wasn’t being used, so Tupper asked the school if he could use it as a museum, as well as an alumni center.

After receiving the go-ahead, he went to S.C. House Judiciary Chairman Chris Murphy, R-North Charleston, to request state funding. Tupper said he estimated the renovation of the building, plus general upkeep for the future of the museum, at around $900,000.

Murphy secured $500,000 through a Statehouse budget earmark for the site.

“He got everybody in the state to realize we really needed to do this,” Tupper said. “For the town of Summerville and the McKissick family.”

The earmark wasn’t without controversy.

On June 22, Gov. Henry McMaster vetoed the $500,000 request, writing that while McKissick’s legacy is unquestioned, the “project would be more appropriately funded by the school district or athletic booster club funds, as is the case with most high school athletic facility upgrades in the state.”

At the time, the governor believed the earmark was for athletic field fixes, supporters said.

Murphy said McMaster’s veto message was incorrect, as the $500,000 was for the museum and not anything related to the school district. The House voted 85-14 to override McMaster’s veto on June 28, and the Senate voted 28-10 to override.

While $500,000 of this project is funded by the state, the other $400,000 is matched by South Magnolia Event Group. Eddie Crosby, president of the group, said everyone in Summerville rallied around this project.

“You can’t find a person that doesn’t have a fond memory of a Friday night in Summerville or a Coach McKissick story at the school,” Crosby said. “He was just a good, godly figure that poured his heart and soul into the kids and community of Summerville.”

Both Crosby and Tupper said the community was enthusiastic about memorializing McKissick.

“Even folks who are new here have heard and want to be part of that legacy,” Crosby said.

Joe Call, McKissick’s grandson, said what McKissick did with football throughout his career put Summerville on the map, and that the museum is an honor to his family and McKissick’s legacy.

“He’s part of the history of the town,” Call said. “I think it’s really important for people to know that when they come to Summerville and visit. When they go through the museum, they’ll get to see a big part of our town’s history and a lot of the growth over his years of coaching.”

Call said Joan McKissick, John McKissick’s wife, had made scrapbooks — composed of articles and pictures throughout the football season — for all 63 seasons her husband coached. Call said Tupper and everyone else working on the museum have taken the scrapbooks to be scanned to be shown at a kiosk at the museum.

“People who played for him or people through the years can come and they can actually be able to look through those scrapbooks,” Call said. “Anybody from whatever year they played, they can go into that kiosk and read the articles from that year and see the pictures from that year. It’s a great way to allow people to see what his legacy was.”

According to both Call and Tupper, Joan McKissick also has memorabilia throughout John McKissick’s career, including the jersey he was given in 1952. Tupper said people of the community are also welcome to donate anything they have.

“Town people have already contacted us about memorabilia they have from back when they went to high school,” Tupper said.

Much like the majority of the Summerville community, Murphy said the museum will have special meaning to him.

“I think it’s a worthwhile cause,” Murphy said. “I played football at Summerville up through the 10th grade. [McKissick was] an incredible individual.”

Crosby said while he didn’t play football at Summerville High  — he played soccer, and even had McKissick try to recruit him to become the kicker for the football team — his wife was a cheerleader at Summerville. Crosby’s wife was the director of the Dorchester Two Executive Foundation while McKissick was coaching, and helped put together a retirement celebration for him.

“He and my wife had a great relationship and he remembered her fondly from our days at Summerville, her days cheering and even when he was trying to recruit me in the weight room to kick for him,” Crosby said. “He was just sharp as a tack…and just as caring and compassionate and approachable.”

Murphy said the McKissick Museum is going to be “a wonderful thing” for Summerville.

“When you come to Summerville, you’re going to stop at this museum,” Murphy said. “I promise you.”

Crosby said that being given the opportunity to help build the McKissick Museum has been a great experience.

“What’s incredibly humbling about this whole thing is that the McKissick family is entrusting us to curate this collection and display it for generations to come,” Crosby said. “It’s an honor to be able to carry that legacy, and give back just a little bit of what Coach McKissick has given to us as former athletes of his, players or even students.”

Tupper said South Magnolia Event Group hopes to have the museum open by the end of the upcoming football season.

Stay Up To Date!